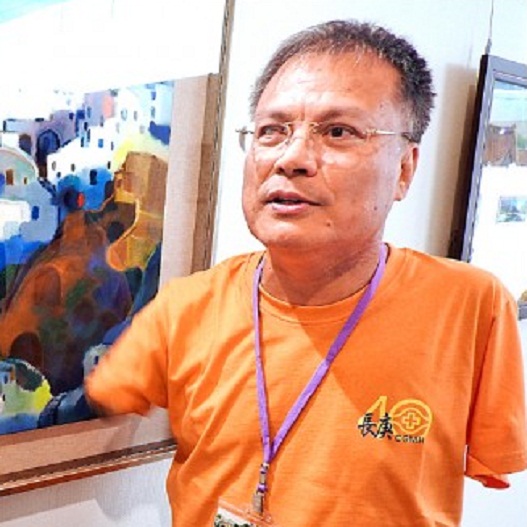 Born on 21 June 1958 in Taidong, Kun-Shan Hsieh grew up in poverty and had to support himself by working in a factory after leaving primary school. At the age of 16, he suffered a very serious electric shock in a work accident. The consequences of this were so severe that both hands and his lower right leg had to be amputated and he lost the sight of his right eye. Faced with these disabilities he taught himself to sketch and draw using his mouth over a period of seven years. In 1980 he learned the techniques of painting with a renowned Taiwanese painter. In 1990 he became a Full Member of the association. Since 2002 he has been a Member of the VDMFK Managing Board. His work has been influenced both by the impressionists and by the traditions of the Far East. His oil paintings are characterised by their rich variations in shade and colour and bear impressive testimony to his character that is both optimistic and full of humour.

Kun-Shan Hsieh’s favourite subjects include landscapes, still lifes and animals. A particular love of his are painted snapshots capturing the motions of an indolently swimming river carp. In experimenting with the possibilities for painting in a large format he produced a work with the title “Golden Pond” in a 259 x 182 cm format over a period of one year. This work won the American visual arts prize of the “Association for Specially Talented Artists” in 1997. Kun-Shan Hsieh wrote his autobiography with the title “I am Kun-Shan Hsieh” in 2002. The book has been a great success in Taiwan and has been translated into several languages.