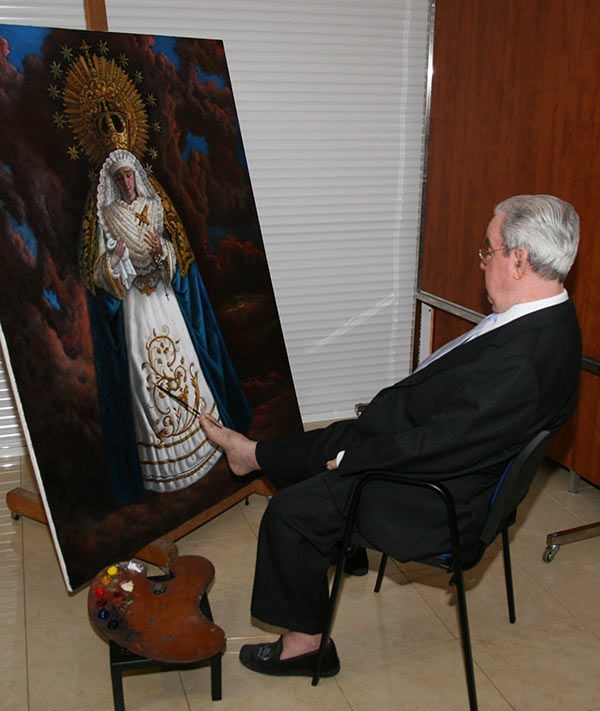 Born on 22 November 1938 in Valverde del Camino, Manuel Parreño Rivera suffered from polio at the age of seven months resulting in the paralysis of his arms and hands. For this reason, even as a small boy, he was compelled to use his feet for doing various activities. He felt a painter’s calling from a very early age when he completed his first drawing at the age of four and won first prize in a school competition at the age of eight. He further developed his artistic techniques in painting and drawing both on his own initiative and later at the school of Art in Seville. The foot painter became a member of the Association as early as 1957 and has been a member of the MFPA board since 1995.

Drawing and painting have remained his favourite activities. His works have brought him numerous awards and honours over the years. Manuel was among other honours appointed professor of the “Taller Municipal de Artes Plasticas” in his homeland in 1980. In 2000 he was appointed an honorary member of the “Pontificia y Real Archicofradia de Nuestra Senora de la Soledad de la Porteria”, In Las Palmas de Gran Canaria, the patron of which is her Majesty Queen Sofia of Spain. The reason for this appointment was the presentation and the consecration of one of his works for a local church. Public attention has been drawn to his works worldwide in one man and joint exhibition. In addition to this, he also lectures widely on the works and the objectives of the Association as well as on art in general.