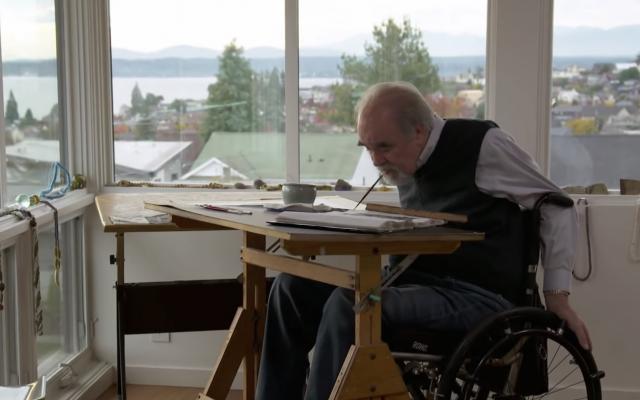 Born on 13 October 1953 in Seattle, Brom Wikstrom began his career as an apprentice in his father’s commercial art business. A swimming accident in 1975 left him paralyzed and he began painting with his mouth. For several years he took painting lessons with his father and in 1985 he received a scholarship from the AMFPA. Since 1992 he has been a Full Member of the Association. In the course of the years, he took college classes in art therapy and he established an arts program at the Children’s Hospital in Seattle. He furthermore demonstrates his painting style in regional schools and at local arts festivals.

Most of his works are in watercolour, characterized by a beautiful clarity combined with firm graphic construction and transparent colours. He also does mural paintings. Brom says of his work: “My paintings are the landmarks of my development as an artist and a person. They serve as a witness to my deep belief that creative expression finds a way to come forth no matter what problems arise.” Brom Wikstrom has received several prizes and distinctions for his works. He presented his paintings to the Empress and the Emperor of Japan and received the famous “Torchlight Award” at a ceremony in Taipei/Taiwan. The Mouth-painter can furthermore look back on numerous reports in the media.

Music to my ears

Joker in black and white